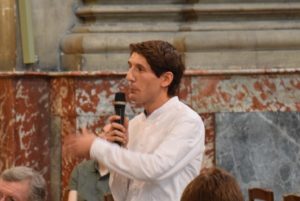 Christophe Zerbini during a presentation of the organ (2015)

We miss you terrbily . Since your arrival at the organ loft of Saint-Sulpice in 2010, you established yourself as an outstanding registrant. The right hand side of the console, with the reed ventils, the couplers, page turning…..and swell box pedal is not really the easier of the two. Liszt’s Ad nos, Reubke’s Sonata, the transcription of the Overture to Wagner’s Flying Dutchman…..nothing stopped us . You were always giving the best of yourself, conscious of the demands of this place and its history.

What moments of musical happiness  have we spent together at either end of the bench! How many knowing looks have we exchanged when we felt that our “Daniel national” was in the middle of surpassing himself in an improvisation. Distressing times we have also shared. You are one  of those people who have such a great humanity that profoundly touch our hearts and lead us to follow your example.

You carried out a great deal of research into the organ of St. Sulpice and its history. Your presentations during Heritage Days were full of clarity and teaching knowledge . You loved your profession as a teacher.

We had so many projects. L’AROSS owes so much and your passing will always leave a bitter taste of unconcluded work. 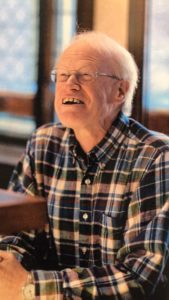 American organist at the Trinity Church (Boston) and at Saint-Patricks’ Church (Roxbury, MA), Ken Starr was a francophile and a great admirer of the art of Aristide Cavaillé-Coll.. He was particulary interested in the compositions of Léonce de Saint-Martin and revered the instruments of Saint-Ouen de Rouen and Saint-Sulpice. He gave recitals at  Notre-Dame de Paris (1977, 2002, 2005) and auditions at Saint-Sulpice (1997, 2003).

The organists and lovers of the organ owe him a lot because he was accustomed to support modern creation by commissioning composers Gerre Hancock, André Fleury, Eugène Reuchsel et Daniel Roth. 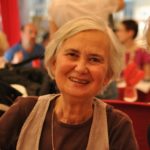 We mourn the loss of Odile Roth, wife of Daniel Roth, who left us 9 March 2015. Mme Roth was a very kind, welcoming person who played a key role in the musical life of St. Sulpice. 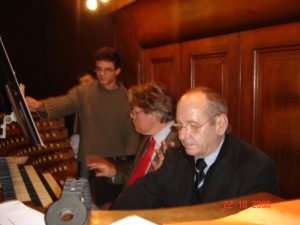 Hervé Lussigny next to Daniel Roth

We are saddened by the recent departing of Hervé Lussigny, the devoted assistant at the organ loft of the Grands Orgues of St. Sulpice. Hervé was a charming man who loved to share his enthusiasm about Aristide Cavaille-Coll, Bach, Widor as well as trains, racing cars, and life in general. St. Sulpice was very much his home, from his childhood where he served in the Children’s Choir (while Marcel Dupré precided as organist) through his later years where he reliably served as M. Roth’s trusted assistant from the first day of M. Roth’s post as titular (Easter, 1985). The world knew Hervé as the friendly host and greeter of countless numbers of visitors to the organ loft of St. Sulpice and its “petit salon de Widor”.

Hervé, the place will not be the same without you. May your kind spirit live on.