Broadcast of the mini-concert of Sunday, December 15th

For the “audition” organized by Saint-Sulpice Parish after the Sunday Mass, Gabriele Agrimonti, a student of CNSMD de Paris, will give an original program combining improvisation, transcriptions of operas and excerpts from the 7 Pastels from the Lake of Constance by Karg-Elert.

This audition will exceptionally be broadcast live on the Youtube channel of Pierre-François Dub-Attenti, around noon.

This book, the result of 7 years of work and collaboration with Daniel Roth, was born in the family atmosphere of the organ loft of Saint-Sulpice. In a nod to Plein jeu, in which Claude Duscheneau interviewed Michel Chapuis, Pierre-François Dub-Attenti and Christophe Zerbini chose the form of the interview to make Daniel Roth better known and share his vocation with their readers.

Rendez-vous on Saturday, November 16, at 8 pm, in Saint-Sulpice church for a concert-presentation. 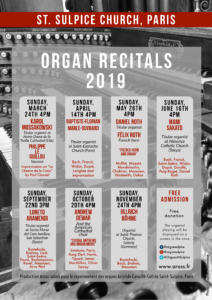