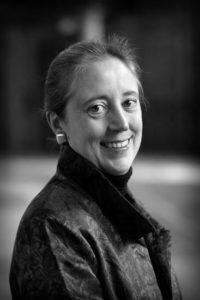 Assistant organist of the great organ

Sophie-Véronique CAUCHEFER-CHOPLIN was born in Nogent-le-Rotrou, France. She grew up in a musician family where she received piano instruction as a small child. After completing piano, organ (Gérard Letellier) and harmony courses at the Ecole Nationale de Musique of Le Mans, she entered the Conservatoire National Supérieur de Musique of Paris where she studied the organ with Rolande Falcinelli. She was awarded the first prizes in organ, improvisation, harmony, fugue and counterpoint (in the classes of Jean Lemaire, Michel Merlet and Jean-Claude Henry). Her academic success was rewarded in 1980 with a prize from the French Ministry of Culture.

Sophie-Véronique CAUCHEFER-CHOPLIN was named titular of the Grand Orgue of Saint Jean-Baptiste de la Salle in Paris in 1983. In 1985, she added the position of co-titular of the Grand Orgue of Saint Sulpice Paris with Daniel Roth. In 1990 after an advanced teaching by Loïc Mallié, she became the first woman to win the second prize in improvisation at the Chartres International Organ Improvisation Competition.

Sophie-Véronique has an extensive international career, having given recitals worldwide in more than 30 countries : she regularly plays in the USA. Since 1998, she has given master classes of improvisation (Dallas, Chicago, New-York, Washington, Minneapolis, Tokyo, Hong-Kong, Singapore, Melbourne, Sydney, etc. and in many French places) and she has lead organ improvisation course (Biarritz, London). From September 2008, she will be Organ Professor at the Royal College of Music of London. She is regularly invited as a judge in national and international organ competitions (AGO National Convention – Chicago 2006, Biarritz 2007, Angers 2008, Chartres International Competition 2008, Karl Nielsen Odense Competition 2011, AGO National Convention – Nashville 2012, Longwood Gardens 2013). She was Guest Organist at the Yale University of New Haven (Nov 2010)

She is considered by her peers to be one of the best improvisers of her generation. Her compact discs of Bach, Mendelssohn, Brahms, Franck, Rheinberger, Messiaen, Grunenwald, Roth along with her recorded improvisations have garnered high praise. Her last recording (Mendelssohn, Bédard) received a “5 diapasons” award in June 2008.